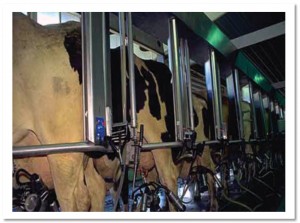 Years of research has determined that silica is an absolutely vital for highly effective and efficient dairy farming. Silica deficiency inevitably results in five negative outcomes:

Diatomaceous Earth has four applications in dairy farming that will direct impact on the deficiencies:

Research conducted by various independent organizations has shown that using diatomaceous earth in optimal levels as a feed supplement for dairy cows can increase milk production by up to 20% to 33%. Butterfat content is also positively influenced by optimal silica application with tests on dairy herds showing an increase of up to 66%.

In addition to increased milk production dairy farmers can experience an additional increase in profits through a reduction in expenses. Silica can have a significant impact on farming expenditure by reducing the required application of chemical inputs, feed requirements and veterinary bills.

Not only does diatomaceous earth have excellent nutritional properties, it is an extremely effective non chemical control for internal parasites when used as part of a regular feed routine. Applying diatomaceous earth externally on the animal and around sheds, pens and pasture will control of pests and insects.

Research indicates that cows with optimal silica nutrition required 25% less feed without any negative effects on the animal.

In relation to dairy pasture, diatomaceous earth has the ability to enhance the efficiency of chemical fertilizers by transferring some plant unavailable nutrients into an available form, holding nutrients in a plant available form and preventing nutrient lock up in the soil. Diatomaceous earth can also prevent the leaching of phosphates by 30% to 90%, potassium by 20% to 80% and nitrogen by 20% to 90%. General research examples of diatomaceous earth’s ability to enhance and improve the efficiency of chemical inputs include the following: 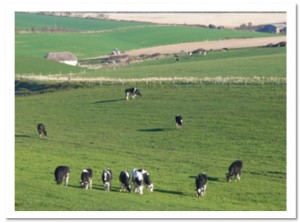 Diatomaceous Earth not only increases the efficiency of chemical fertilizers but is extremely effective in controlling the pH level in soils. Whereas lime has only a single mechanism for controlling pH in soil, research indicates that silica has five mechanisms and is more effective than lime. Alarmingly, both lime and dolomite can transfer phosphates into a plant unavailable locked up form, as such, the use of lime or dolomite solves one problem (pH) and creates another (phosphate lock up).

Due to silica’s ability to combat plant and soil disease, fungal, insect and pest attack the required application of insecticides, pesticides and fungicides can be reduced considerably.

Research has shown that silica’s ability to retain and transport water to the plant can reduce pasture irrigation rates by up to 30% providing a further reduction in expenses.

High quality diatomaceous earth has a residual effect when in soil and depending on the soil conditions prior to first application its subsequent application rate will most likely be reduced and may even be unnecessary for a period of 1 to 3 years.

Note: Advice from a qualified agronomist to provide approved comprehensive (potential and actual nutrient levels) soil and leaf analysis should be obtained before reducing input applications.

Silica deficiency in animals has been linked to a broad range of health problems from poor calcium utilization to arterial disease. Animals deficient in silica can experience significant positive outcomes when optimal silica amounts are added to their feed. Results from decades of research and field trials show that endemic health problems, even those that have been unresponsive to traditional chemical and medical treatments, can be controlled with optimal silica use. Of particular importance to dairy farmers is that mastitis, scours, tumors and cysts can be controlled.

Silica is directly related to the formation of bone, cartilage and collagen with research indicating that silica can increase the collagen in growing bone by up to 100%. Silica can also accelerate the growth in calves and plays a vital role in weight gain in cows. Tests comparing weight gain in animals using silica as a regular component of feed have generally followed two testing patterns:

Diatomaceous earth is an extremely effective non-chemical control for internal parasites when used regularly as part of the feeding program. Applying diatomaceous earth externally on the animal and around sheds, pens and pasture will control of pests and insects.

Although perfectly harmless to humans and animals food grade diatomaceous earth contains sharp microscopic edges which upon contact with parasites/worms in the digestive tract of the cow cut the parasite which then dies and passes harmlessly through the digestive system. Because control is accomplished through a mechanical means, the parasites cannot develop resistance or immunity. (Heart worm and lung worm are not controlled)

The control of flies, buffalo flies, ticks etc can also be accomplished through the microscopic edges of diatomaceous earth. If spread on pasture diatomaceous earth will not only act on soil and grass fertility but will also act as an insecticide which can also control pests such as cut worm and army worm.

As diatomaceous earth is able to control pests and insects by a purely mechanical process the pest/insect is unable to build up resistance or become immune. While controlling insects and pests with extreme effectiveness, diatomaceous earth is 100% organic and will not be contribute to milk residue and will not be subject to any withholding period.

In addition to the benefits experienced by all farming practices, some of the documented effects specifically related to dairy farming include the following:

After feeding 100 dairy cows on silica for approximately one year, the following results were noted:

An application of 40 grams per day per cow resulted in the following:

Results from feeding 5 to 6 ounces [142 to 170 grams] of food-grade silica to dairy herd for a period of five weeks:

Results of tests carried out on cows demonstrated that optimized silica nutrition reduces the required total feed application by 25% without a negative effect on the development of the tested animals. (Research Report, Dr. Vladimir Matichenkov)

When a 2% ration of silica was fed to dairy cattle an analysis revealed no incidence of residue in the milk. (University of Illinois, College of Veterinary Medicine)

Four groups of cattle of over 300 head each, test steers, control steers, test heifers, control heifers. All groups primarily Hereford/Angus crosses with remainder being Hereford, Angus or exotics. All groups nearly identical in breed composition.  Test groups were fed a silica feed supplement at the rate of 3% of total daily ration. (Note: Midway through the test, Heifer ration was changed from 3% to 1.5% as there had been a reduction in the daily feed consumption with the test heifers. Normal feed consumption resumed with the lower percentage of silica feed supplement.) Significant findings include:

“Our problem was that our calves regularly hung out as the salt feeder and also licked dirt. This year we put DE out as soon as the first calf arrived and we find they start eating it when just a few days old. They have virtually no interest in salt or dirt.” (Dale and Sussanah Krinke)

“The results of last year were definitely positive. It cut our scour cases down to almost zero…

This is truly a Godsend product in relation to expensive antibiotics and the stress on calf and farmer”. (Allan Szklaruk)

Three winters ago calf scours were a severe problem, after beginning to use DE the problem disappeared, “We were pretty desperate. We would have tried anything”. The scours appeared again when the cattle went without DE for two weeks but the problem subsided when DE was again given to the cattle, “We really believe in the stuff”. (Evelyn Kasahoff)

“Heidi Farms is a dairy operation milking approximately 250 head. We first started using DE because there was mold in the feed and the cows were spitting up their cuds. We fed the DE at a rate of 100 grams per cow per day and that solved the problem. We have continued to feed the DE at this rate – an ounce of prevention is worth a pound of cure. We double that rate for a few days when the heifers come in from pasture to eliminate worms, etc”. (Heidi Farms)

“Another use we found was to use the DE on the backs of animals to get rid of lice and flies. The lice control was hard to see if it was totally effective but we think it helped a lot. As far as flies, it worked but had to be used every other day to keep good control. We have also used the DE on our horses for the control of flies in the summer. We were also surprised to see the horses eat the DE, which of course was good for them to get rid of internal parasites.” (Kelly and Audrey Kaufmann)

“Also tried the grey powder from a different company and the calves didn’t like that, it was a waste of money. I just tried it because it was cheaper and shouldn’t have.” (Sylvia Martinetz)